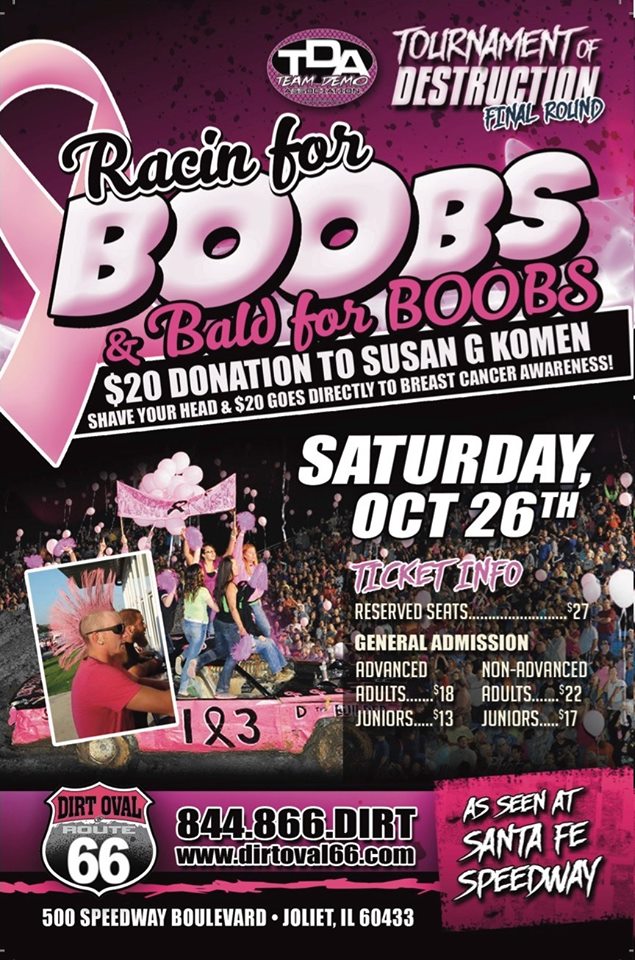 This is the rescheduled event from Saturday, September 21
Parking, Seating, and Pre-race Party all open at 4:00pm | Show Time: 7:15pm

Season Championship Event! Team Demolition Derby, Car & Truck Racing Champions will emerge from the dirt and destruction after one final night of mayhem for 2019. Plus, the all-women teams High Risk and Double-D Destroyers battle for supremacy in their own Team Demo race known as “Racin’ For Boobs” to support breast cancer awareness. Drivers for the 9th edition of the wildly popular race will be announced in early September.
Featured Races:

Team Demolition Derby – 6 teams in the ultimate war of wreckage to decide the 2019 Tournament of Destruction Champions!

Circle Track Cars & Trucks – Series race Final Round #4 of 4. Each division races 10 laps around the perimeter of the Team Demo arena to decide the 2019 series Champions.

Memorial balloon release – thousands of pink balloons will fill the sky in memory of those who fought breast cancer.
Bald for boobs – get your head shaved for a $20 donation to breast cancer research.
Over the shoulder relay race – put your speed and skills to the test and race (on foot) in fro